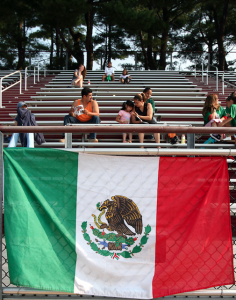 Mexican immigrants in Lowell, Massachusetts, hang the Mexican flag during a community soccer tournament in 2007.

The World Cup in Russia is set to begin in June. Of course, the United States won’t be participating. Team U.S.A. failed to qualify for the World Cup for the first time since 1986.

But Mexico will be there and fans of El Tri are expected to sure their support in the U.S. by dressing in red, white and green colors of the Mexican flag. “This World Cup,” ‘America’s Team’ is Mexico,” the Washington Post declared.

The colors will be on car flags flopping through East Los Angeles when Mexico meets Germany in Moscow. Someone will likely walk into a Cambridge, Massachusetts, bar draped with the flag around his body like a cape. A child in Houston will probably have Mexico’s colors painted on her face.

And there will be outrage.

In June 2016, I wrote a story about the history of the Mexican flag in the U.S. following a Donald Trump presidential campaign rally in Albuquerque, New Mexico, that turned violent outside. Demonstrators threw rocks at riot police. At least one protestor punched a horse. Others tosses objects threw windows and jumped on vehicles, causing thousands of dollars of damage. The largest city in the nation’s most Latino state had become ground zero for the rage against Trump’s previous comments about Mexican Americans and Mexican immigrants.

After the Albuquerque protests, Trump lashed out on Twitter, condemning “thugs who were flying the Mexican flag.” Some media outlets played images of protesters waving Mexican flags in a loop, suggesting that foreign bodies, or even worse, unappreciative Americans were showing allegiance to a foreign country due to a disagreement with one presidential candidate.

But as I wrote then, the flag of Mexico has a long history in the United States, despite being a symbol of a nation south of the border.

Set to red, white and green bars, the Mexican flag contains in the center an eagle sitting on a cactus eating a snake. The central emblem is based on an indigenous legend of the Aztecs settling in present-day Mexico City on what was originally a lake-island.

After the United States took over a third of Mexico’s territory following the U.S-Mexican War in 1848, the flag remained a symbol of resistance due to broken promises outlined in Treaty of Guadalupe Hidalgo, said David Correia, an American Studies professor at the University of New Mexico, told me. That treaty said former Mexican citizens from New Mexico to California would be granted full American citizenship, but instead, they faced illegal land seizures by whites and decades of discrimination, Correia said.

“In New Mexico, those claims have never been resolved,” said Correia. “Neither were they resolved in other places in the (American) Southwest.”

Mexican immigrants used the flag as symbols for their mutual-aid societies that provided funeral insurance and avenues for other civic engagement during the 1920s and 1930s in cities like Houston and San Antonio. Often, the groups also flew the American flag.

That changed when returning World War II Mexican American veterans began getting involved in civil rights. G.I. Forum founder Dr. Hector P. Garcia and John J. Herrera, a national president of the civil rights group the League of United Latin American Citizens, discouraged the use of the Mexican flag. They, and other moderate Mexican American reformers, believed sporting the American flag at events and protests reinforced the notion that Americans of Mexican descent were the targets of racism.

During the Chicano Movement, activists proudly brought the Mexican flag to protests to showcase their ethnic pride. “It also reminded people that our history is one about being displaced,” Jennie Luna, a Chicana/o Studies professor at California State University Channel Islands

Luna said today waving the Mexican flag is no different than Italian Americans waving the Italian flag in New York’s Little Italy or Irish-Americans carrying the Irish flag in South Boston. “The difference is that Mexican Americans have never been fully incorporated into the history of this country,” Luna said.

Karla Molinar, a University of New Mexico student and DREAMer who was thrown out of the Trump rally in Albuquerque, said she saw nothing wrong with protesters waving the Mexican flag. “They are just showing that they are proud of where they came from and they won’t put up with the hate,” said Molinar.

Mexico’s national soccer team routinely drew 75,000 or more to friendly games at U.S. stadiums. More than 30 million people of Mexican descent—Mexican Americans and Mexican immigrant—live in the U.S., and the national team south of the border has many rabid fans among them. Even games played on U.S. soil against Team U.S.A. pull in divided crowds.

With the U.S. out of contention for the World Cup, few American flags will be flying in Russia or at American bars and pubs catering to World Cup fans of international teams. The Mexican flag, however, will be a regular feature.

The immigration reform in the United States by this time likely will remain stalled. The National Guard’s presence along the U.S.-Mexico border will continue to stark debate. Trump’s proposed “border wall” almost certainly will keep tensions high among some conservatives and immigrant advocates. In this environment, the sudden proliferation of Mexican flags on U.S. streets can expect to generate an angry reaction.

But on the screens in living rooms and public spaces, the pride of Mexico fans will focus on another opponent: the world. Mexico will have to get past 2014 World Cup champions Germany, then Sweden, then Denmark, and then Wales. Get out of that, expects even more Mexican flags on U.S. cars. Get the World Cup final for the first time in team history, look out.

___
Russell Contreras is a writer based in Albuquerque, New Mexico.