Around 8 a.m. on Election Day, Jacqueline Lima and her 4-year-old sister, Karla, went to the front door of their East Las Vegas home. A crowd had conspicuously gathered outside, and the 20-year-old Lima knew something was up. 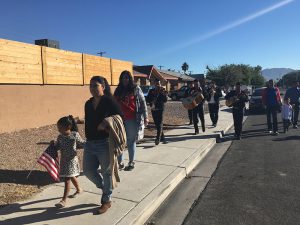 Through a screen door, Lima spotted activists she knew. Next to then, stood a handful of reporters holding iPhones and digital records. Mariachi band members slouched against an SUV.

Within seconds, the mariachis and the stumbling crew of journalists placed themselves at the door of Jacqueline Lima. Raul Sosa, the mariachi group’s bass guitarist, gave the signal and the musicians began to play.

“Hello, Jacqueline. Have you voted yet?” Grecia asked. The 20-year-old hadn’t. “Let’s go vote. We’ll play for you as walk to your voting location,” Grecia said. Halle Hewetson Elementary School was only a few blocks away.

With the band behind her, Jacqueline Lima walked to the voting location in this predominantly Latino neighborhood. She would cast her ballot for Democratic presidential candidate Hillary Clinton and Democratic senatorial candidate Catherine Cortez Masto. “This is amazing,” Jacqueline said with Karla shuffling beside her. The small girl waved a small American flag. Neighbors looked out of windows and cheered. 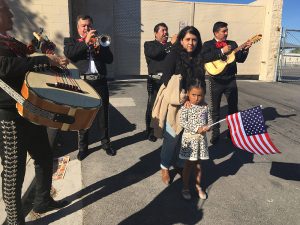 For voting rights activists, East Las Vegas appeared as Ground Zero for getting out the Latino vote in Nevada, an important swing state Democrats and Republicans both needed in a close election. A few days before, an early voting site at Cardenas Markets stayed open a few hours late after would-be voters lined up right before a deadline. Images of the long lines hit social media, and Cortez Masto even dropped by to say hi.

And a day before Election Day, Los Tigres del Norte, the norteño-band ensemble based out of San Jose, California, paid a visit to the Culinary Workers Union Local 226. The union represented many Latino hotel workers include some who worked at the Trump International Hotel Las Vegas.

“This is powerful. You can feel the energy,” said Astrid Silva, a DREAMer mentioned in a speech by President Barack Obama and who spoke at the Democratic National Convention.

By late 9 p.m. Election Night, it became apparent Republican Donald Trump had pulled off an upset. Michigan, Wisconsin, and Pennsylvania had swung in his favor. Nevada, after all of the organizing, wouldn’t matter in the presidential campaign. It would go blue as the nation went red. 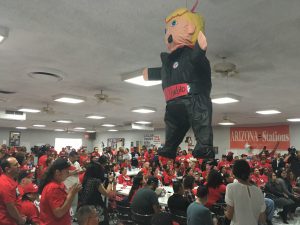 Members of the Culinary Workers Union Local 226 in Las Vegas, Nev., cheer during a rally under a Donald Trump pinata on Monday, Nov. 7, 2016. Voters in swing state Nevada will play an outsized role on Tuesday when they decide whether Hillary Clinton or Donald Trump should get their six coveted electoral votes. The state also has seen a high number of Latinos vote early where Democrat Catherine Cortez Masto is trying to become the nation’s first Latina senator. (AP Photo/Russell Contreras)

Culinary Workers Union members, gathering at the Democratic victory party at the Aria Resort and Casino began hugging each other after networks reported Clinton had called Trump to concede the elections.

One DREAMers let out a loud scream and fell to the floor. “I can’t go back. I can’t,” she said. Friends helped her up before leading her away.

Silva tried to keep smiling. “We can’t give up the fight. It’s about our families,” she said.

The place erupted into a moment of excitement after someone yell, “Hey! Sheriff Arpaio lost!” Some who heard the news cheered loudly. Maricopa County Sheriff Joe Arpaio, the Republican sheriff in the Phoenix area, had been a hated man among immigrant activists because of his raids and hardline immigration stances.

Organizers tried to get the room excited a few minutes later by bringing out Cortez Masto. The former Nevada Attorney General had edged out her Republican opponent and was now the nation’s first Latina senator. She told the crowd she promised to be a “check and balance” during a Trump presidency.

Meanwhile, cartoonist Lalo Alcaraz watched the election results from a Los Angeles airport. As Las Vegas activists emptied out of the casino hall, he was boarding a red-eye flight to Miami for a speaking engagement. The California-based artist had produced a number of anti-Trump cartoons, including one where the Republican’s hair was made into a Hitler salute.

Onboard with Alcaraz to Miami was United Farm Workers co-founder and Clinton ally, Dolores Huerta. “We’re all in shock, dude,” Alcaraz told a reporter. 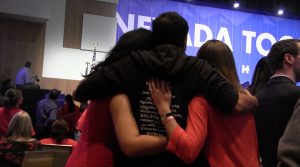 In Albuquerque, New Mexico, Javier Benavidez watched the results
trickle in from his South Valley home, and turned off the television around 2 a.m. He had organized the anti-Trump protests during the Republican’s two visits to Albuquerque. One of those protests, turned violent after some demonstrators threw rocks at Albuquerque police.

Benavidez himself was thrown out of Trump’s rally when he and other staged an interruption.

By 4 a.m., Benavidez, the leader of the advocacy group SouthWest
Organizing Project, still couldn’t sleep. “Honestly, I got energized,” Benavidez said. He started thinking of ways a Trump Administration might embolden activists and Latino voters even more. “We start building the resistance now,” he said.

The next day, Benavidez and others organized a “healing circle” with fellow advocates. They prayed and asked for guidance. A Native American-Chicano curandera gave a blessing and participants bowed heads while standing in a circle. Everyone then shared experiences about being shocked Clinton lost.

“At least the Democrats in New Mexico retook the House,” someone said.

It had been under GOP control for two years and had tried to pass some criminal justice reform bills with the support for Republican Gov. Susana Martinez, the nation’s only Latina governor. 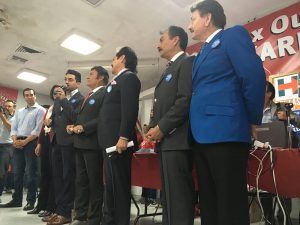 But winning the New Mexico House came at a price: the long-time
Democratic Senate Majority Leader Michael Sanchez was defeated thanks to a big push from a Martinez-linked PAC. That meant two white Democrats would lead both legislative chambers in New Mexico—the nation’s most Hispanic state.

New Mexico’s two U.S. Senators also are white. The state hasn’t had a Latino senator since 1977.

Maria Varela, a Mexican-American member of the Student Nonviolent
Coordinating Committee, said the Clinton lost brought back memories of the 1964 Democratic National Convention. That’s when she and other Democratic activists tried to seat black Democratic delegates to the all-white Mississippi delegation. “We lost hope,” she said. “It was devastating.”

But the election of Trump is not the same, Varela believed. It could unite
progressives and Latinos in a different way.

Just how different depends on whom you ask. Some claimed more voting registration was the answer. Others said more advocates needed to be trained to run for office.

And if the mass deportation were to begin in the style of the 1930s, Garcia said activists would be ready.

“We will be prepared to resist,” he said. “If we need to.”
___
Russell Contreras is a writer based in Albuquerque, New Mexico.