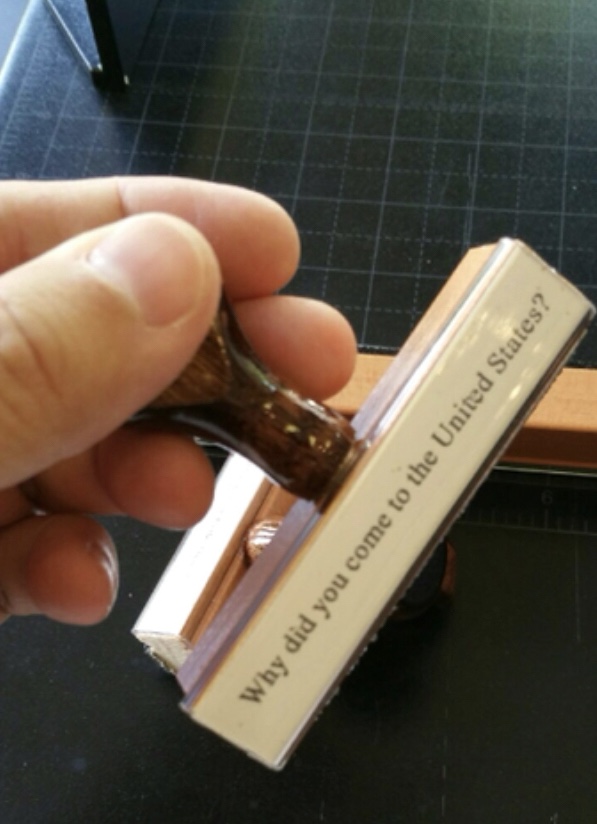 A photograph by artist R. Galvan prominently features a custom rubber stamp from 2017. The piece is titled “Administrative Care” and shows a hand about to continuously imprint this query: “Why did you come to the United States?”

This is one of the haunting questions unaccompanied Central American children fleeing the region’s violence are asked during their intake immigration questionnaire. The survey is conducted to gauge whether the minors can be granted refugee status in the United States, as writer Valeria Luiselli compellingly describes it in Tell Me How It Ends: An Essay in Forty Questions.

Galvan’s work inscribes an aesthetics of bureaucracy to the system’s temporary axiom. “Administrative Care” suggests an unstoppable managerial juggernaut recording how Central American children are made into the word and the U.S. world.

The stamp is kept in motion by governing decisions of admissibility and inadmissibility for these mostly unwanted minors in U.S. politics.

Does it really matter to xenophobic America why the children came, when they are always a source of skepticism and a site of “illegality” writ large? The rubber stamp rubber-stamps the nation’s disapproval of Central American child migrants over and over. It chisels a narrative of how the children are marked–forever stamped–in the U.S.A.

Galvan’s device can be used anywhere. It stamps the states of the American world now. It is a background question, a bureaucratic activity that is perpetually “there” with no formal or permanent solution for living in the United States. “Administrative Care” is bureaucratic etiquette, shorthand for the beginning process of being booted out of America.

Galvan’s image, in a manner of speaking, is involved with the hasty but newsworthy affairs of the day, as a New York Times phone notification on 8 January 2018, revealed. On this day, one hundred and thirty-six characters made known: “Nearly 200,000 Salvadorans allowed to live in the U.S. temporarily after 2 earthquakes in 2001 must leave, the Trump administration said.”

Temporary Protected Status (TPS) is dead. These LatinX exits must be arranged by 9 September 2019. After this timetable, Salvadorans will lack legal permission to stay in the United States, and become “illegal.” But as Jonathan Blitzer, a New Yorker staff writer, so well puts it, migrants under TPS consider the United States “as home, and many are unlikely to leave just because the government tells them to.”

TPS was created under the 1990 Immigration Act, and signed into law by President George Bush. El Salvador was one the first nations to receive TPS due to the 1980s civil war and instability in the region. This means that two hundred thousand people, since 2001 or earlier, have been legally living and working in the United States under this federal TPS designation. Recipients pay almost $500 every 18 months to renew their TPS permits, adding up to an estimated $10,000 throughout the course of their U.S. stay.

The Department of Homeland Security stated that it was terminating the humanitarian program for Salvadorans allowed to live and work legally in the United States since “the original conditions caused by the 2001 earthquakes no longer exist.” Homeland Security concluded that El Salvador’s damaged infrastructure has since been reconstructed. Other migrants from Haiti, Sudan, and Nicaragua also saw TPS come to an end. The agency will decide in 2018 whether to extend TPS for these other nations: Syria, Nepal, Honduras, Yemen, and Somalia.

The regulatory question conspicuously made by Galvan has been inverted to a procedural declaration, a clearer administrative denouement: “You are leaving the United States.” The news, the Washington Post added, swept “waves of outrage and anxiety from Washington to Los Angeles and to the Central American nation itself.”

The New Yorker underscored that those with TPS “have established deep roots in the U.S.—buying homes, paying taxes, starting families, and joining the legal workforce.” The magazine elaborated that Salvadoran TPS holders are “parents to a hundred and ninety-three thousand children who are American citizens.”

“You feel like you’re up in the air,” Oscar Cortez, a 46-year-old plumber in the nation’s capital, told  the Post upon reading this information on his mobile phone. An NPR lead put it this way: “Many immigrants from El Salvador are in a state of shock.”

Cortez returned to El Salvador in 2016 for the first time since his departure to the United States, and told the Post: “I felt like a foreigner in my own land. Everyone is looking at you like you’re from outer space.”

Can one get past that extreme quantity: 200K? Two hundred thousand Salvadorans who are deracinated and deracinated again. There is a certain newness to this sequence of uprooting, first from El Salvador, next from the United States, and then a displacement of dualism.

Is there a full engagement with anything for this group, a population that because of its “temporariness” in El Salvador as well as the United States, only surfaces in the present time, in their quasi-legal present state of things?

200K—or, 200K X—as in two hundred thousand X’s that are more than just people. This is a LatinX current, an impact that cannot be expressed by people alone.

What does it mean for something to be both contemporary and temporary? To function through a temporary mechanism: the temporary now, the temporary present, the possibility of being not present?

200K as a present in the moment and in a given U.S. location—the temporarily present who are available in this place until this location is no longer available to them?

A present beginning of being phased out, of changing status from being temporarily welcomed to permanently excluded?

TPS as an originator of new problems, a sign of a time that hardly passes, as LatinXs correspond to the deportable present and future?

These seeming LatinX “tempo-rarities” are ushering us into urgent problems of the present: unrestrained LatinX evacuations.

By LatinX evacuations I mean those that are en route to being discharged, that may or may not be prepared, that are largely involuntary but still have a backup course of action.

What is the aftermath of these evacuations, what do LatinX temporary subjects do, and where do they relocate?

LatinX evacuations are part of a new twenty-first century exodus, a flooding in reverse, a LatinX removal of a different kind of “minor” but lawful American.

An opinion column by the New York Times Editorial Board expressed concern about these LatinX removals, petitioning “Don’t Deport the Salvadorans” and citing a triad of gang violence, drought, and poverty as a reason for finding a legal way to allow them to stay in the United States.  “To uproot them is cruel and unnecessary,” the Editorial Board appealed.

Salvadorans who migrated because of a natural disaster are being sent back to environmental chaos, to a region now recognized as the corredor seco, or the dry corridor. The frequent and severe droughts that are creating “food insecurity” in the Northern Corridor of El Salvador, Honduras and Guatemala are now inducing climate-triggered migrations.

LatinX evacuations summon different kinds of survival. Univision News ​chronicled how ​Veronica Lagunas​’s ​emergency plan​ will be executed: “The first step is to change houses, because [authorities] have our info, our fingerprints, and addresses.” El Salvador is not an option for Lagunas, an office cleaner. Her goal is to move to Canada.

As Salvadorans with expiring TPS authorizations will soon be subject to deportation, they may also opt to join the unknown numerosities of X’s “illegally” dwelling in the United States, working in informal sectors, and not so much living in the shadows, but as Latin American migrants dub this state, estar en negro. This maxim’s corollary in English is “working off the books,” or “working under the table.”

I want to briefly ruminate on this instructive apothegm’s literal meaning: to be in black, to be, in other words, included in darkness, to be simultaneously in and outside of great unknowns and making strategic moves. This does not mean a black monochrome that is completely void or a dismal dead-end.

It foregrounds a cumulative darkness that is the beginning of something else entirely: an X in black that slides in and out of that tenebrosity with distinctive contemplations of being. It could be a weighty and subterranean pile of X’s getting into the shit, shall we say—TPS X’s from “shithole countries,” as the forty-fifth President of the United States referred to migrants from El Salvador, Haiti, and the African continent.

Nicaraguan-American political pundit Ana Navarro rhetorically but perceptively inquired about the blacknening of this U.S. surplus excrement on CNN: “You know what Haitians and Salvadorans have in common? They are in completely different parts of the world … [but] they are black. They are black.” The private matter of the shithole is now a public one. That being the case, that shit must be taken seriously. LatinX is living scatology and cannot be contained. LatinX is something, and it means something, in the world. It does not succumb to the shithouse.

X factors—and certainties like “a clear hostility” toward TPS—compel us to see the forms of life and multiple becomings that LatinXness is taking “in black.” Bertila Parada, whose son is a TPS holder, told the Times from San Salvador that: “When they return to the places where they were born, they’ll be unknowns.”

The contemporary configuration LatinX is simultaneously activating the unknown in the United States and in El Salvador.

These Salvadorans with a deadline—present and future unknowns in their birthplace—are unknowable U.S. LatinXs, too. This LatinXness is unsettled, as is their temporariness, their Salvadoranness, their Americanness.

___
Claudia Milian is the author of Latining America: Black-Brown Passages and the Coloring of Latino/a Studies.