Crónicas is an online forum where journalists and academics research, produce, and disseminate content with the U.S. Latino and Latina world in mind. These two professional bodies of thought converge through a simple but purposeful goal: to produce knowledge together. If reporters seemingly write at an eighth-grade level about everyday life, and the readability of scholars is crammed with illegible jargon about quotidian existence, these two specialized entities come together here, digitally, in a confluence where journalists + academics meet to disrupt their fields’ customary routines. The collaborators for this venue are not restricted by limited word counts, or bound to required peer-review processes. 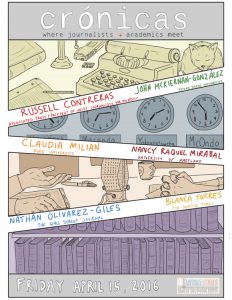 crónicas picks up the mainstream’s overwhelming reception of indifference toward Latino and Latina communities in the United States. Journalists and academics gesture toward a new historical record of the present: what it is that they find worth critically pursuing as well as worth saving, narratively speaking, about Latino and Latina lives.
This project began in Spring 2016 at a small conference organized and sponsored by the Program in Latino/a Studies in the Global South (LSGS) at Duke University. It bore the same descriptor found in these electronic pages, crónicas: where journalists & academics meet. The five participants––Russell Contreras, Associated Press journalist and former President of UNITY: Journalists for Diversity; John McKiernan-González, Associate Professor of History at Texas State University; Claudia Milian, Associate Professor of Romance Studies and LSGS Director at Duke; Nancy Raquel Mirabal, Associate Professor in American Studies and the Director of the U.S. Latina/o Studies Program at the University of Maryland; Nathan Olivarez-Giles, The Wall Street Journal; and Blanca Torres, San Francisco Business Times––engaged in the one-day launching-pad to visualize this site. The group deliberated on a new practice of narrative inquiry by Latino and Latina intellectuals in the twenty-first century, as journalism and academia are not incompatible mediums.

The titular crónicas is not by chance. The many forms of reportage and traditions found in the journalistic and literary crónica (or chronicle), is a narrative form that will be manifested here, too, through essays, recollections, travel writing, memoir, interviews, and more. There is no shortage of possibilties. Across disciplines and across angles of vision, crónicas: where journalists & academics meet is a vehicle for reflecting on the mélange of Latino and Latina experiences through dynamic models of discussion.

The word “crónica” is doubtlessly a nod to the Latin American genre. But it is also an acknowledgement of U.S. Latino periodicals founded in the late nineteenth and early twentieth centuries, such as the Laredo-based La Crónica, which promoted in-depth coverage of issues affecting Texas Mexicans.

This titular crónicas, in plural form, gears toward a joint articulation and new commitments by journalists and academics in search of a public form and an unrestricted forum.